The Government is planning to build an extension of the Northern Line from Kennington to Battersea Power Station via Nine Elms.

This project is part of the Vauxhall Nine Elms Battersea Opportunity Area, which will see the transformation of 195 hectares of land along the river between Lambeth and Bridge and Battersea Park, and the creation of 16,000 homes and up to 25,000 jobs over the next 20 years.

Tunnelling work will go under our estate and permanent shafts to provide ventilation, cooling and emergency access are planned near Kennington Green and in the old Lodge on the other side of Kennington Park. 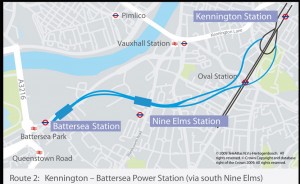 The shaft at Kennington Green will be very close to Sherwin House and residents’ concerns about traffic, noise and pollution during building works were spelt out to the Lambeth Council transport planning officer who attended our February meeting. He said that the Council intended to restrict works’ lorries to the major roads in the area and that they would be banned from using any side streets. We will be holding them to that commitment!

As well as our concerns about the effects of the work at Kennington Green, we also made it clear that we would expect TFL to carry out full surveys of our estate before any tunnelling takes place, given the seventy-odd years of vibrations from the tube our foundations have been subjected to.

A public enquiry is expected to be held in Autumn 2013, with construction planned to start in Spring 2015.

Lambeth Council’s Overview & Scrutiny committee will be meeting on Wednesday 20 March at 7pm at the Wheatsheaf Hall, SW8 2UP, and will focus on updates on Vauxhall Nine Elms regeneration and the Northern Line Extension.