Transport for London is now consulting on the Extension of the Northern Line from Kennington to Nine Elms and Battersea.

Representations and comments, either for or against the NLE, can be made in writing to the Secretary of State for Transport until Tuesday 18 June 2013.

Drop in events are being organised so that we can speak to TFL and view the application. The nearest events to us are:

The application documents can also be viewed at local libraries and Council offices.

It is anticipated the whole process will take about 18 months from the date of the application to the Secretary of State’s decision and it needs to be completed before the project can move forward into the construction phase.

A local group has been set up – Kennington & Walworth Neighbourhood Action Group – to consult with Transport for London on the Northern Line Extension and make sure that the views of local residents are heard. They have a website on http://kpnag.wordpress.com/ where those interested can find information on the potential effects of the work on the area around the Park. 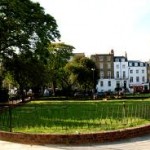 However, in addition to the proposed vent in the Park, highlighted by KWNAC, a further vent is also being planned for Kennington Green, close to Sherwin House. Lambeth Council’s Senior Transport Planner came to our February meeting where KPE residents expressed concerns at the effect of building work on traffic in local streets, noise, dust, vibrations and general disruption, as well as the longer term effects of tunnelling and then additional trains running underneath us. At the very least, we told the Council’s Planner, we want a condition survey undertaken on potentially affected properties on the Estate before any work started.